October 7, 2013 — Today is the 164th anniversary of the death of Edgar Allan Poe. If you forgot, no worries, I’m sure Hallmark has you covered. When we remember Poe’s death day, we’re doing a few different things. We’re mourning the loss of one of our great writers. We’re mourning the sad life of a tragic soul. We’re doing what we can as a culture to make amends for not recognizing his genius during his lifetime. But, mostly, I think, we’re commemorating something else…the mystery of his death.


For the past seven months or so, I’ve been living Poe, traveling up and down the East Coast to sites, artifacts, and memorials related to him, both as part of my next book and to exorcise some of Poe from my own poor soul. My trek is only half done, but so many of my questions are much less than half answered, including my biggest…how has Poe found such a strange, unique, transcendent niche in world culture?

The answer, of course, is probably an interconnected web of complicated factors and reasons that can never be cleanly parsed. But you can see some of the general reasons. A gigantic one, I believe anyway, is the mystery of his death.

The inventor of the mystery tale left us with one final, unsolvable mystery. The legitimizer of the horror story left us with one final, unknowable horror. Nobody knows what happened in the days leading up to Poe’s death. All we know is that the death itself was characterized by raving, begging for someone to “blow his brains out with a pistol,” and finally commending his “poor soul” to whatever gave him life and then gave him that life.

It’s a terrible way to go. But a fascinating story to hear.

And if that’s a weird reaction, well, Poe was a weird poet. 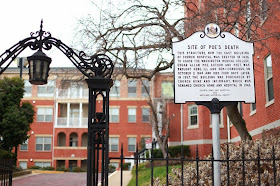 To commemorate his death day, I’ve chosen a series of pictures from my sojourn so far visiting the hallowed haunts of Poe. These images represent just a fraction of what I’ve seen, and each has a story that I can’t wait to tell you. Two stories actually, Poe’s own story and mine in visiting the sites.

This past week, Roger Corman posted on his Twitter account that there can never be too much Poe. I am actively testing that theory. So far, he’s dead on.