It’s So Quiet in the Ruins: Medfield State Hospital and Cemetery 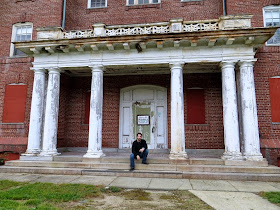 October 8, 2013 — Today, it’s my favorite place in all New England. Tomorrow, maybe the day after that, maybe next week or month, I’ll have enough objective distance to better place it among the amazing places that I’ve visited in the northeast. But, when that happens, it will without a doubt firmly remain one of my most favorite places in New England.

Most of the story of the ruins of Medfield State Hospital won’t surprise you…but a big, important part of it will. Let’s get all the other stuff out of the way, first, though. 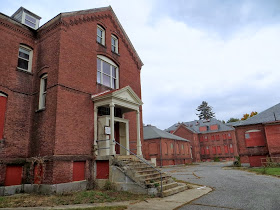 Built at the end of the 19th Century as the Medfield Insane Asylum, the institution had an overwhelming charter…to care for the masses of men and women who could not care for themselves. It swelled to almost 60 buildings across some 1,000 acres at its largest and catered to the needs of more than 2,000 patients at its most crowded. It was a veritable city of the sick and mentally ill. Or a village. Or it takes a village. Or something.

It lasted more than a century, but like so many of the massive institutions from that era, eventually shut down. Medfield made it to 2003, though, which is basically yesterday in antique mental institution years. Currently, it’s in the abandoned phase of the usual timeline that these places follow, done with being useful as it was, but not yet ready to be chopped up for apartments or reinvented as part of a more modern medical complex.

That’s all a tune you could’ve named in three notes.

But here’s where Medfield State Hospital is unique.

For some reason, the powers that be in Medfield...either through divine inspiration, superhuman brilliance, or nuclear levels of cool...opened up the complex to the public.

That’s right. It’s okay for all of us to roam among these ruins.

I just want to high-five them all with cheeseburgers in my hands. 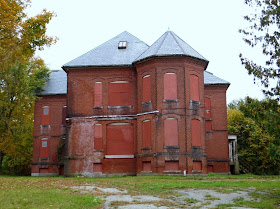 Sure, they sealed up the buildings and plastered them with “Do Not Enter” and “Watch out for Cancer” and “Your Risk, Not Ours” signs, but during the day, you can stroll along the pitted roads that wend between them, walking at your leisure and whim right up to these empty buildings that loom above like a series of sad morality tales, their windows shuttered with red-painted plywood and their concrete steps crumbling into gravel.

Basically, they turned the grounds into one of the coolest parks in the country. 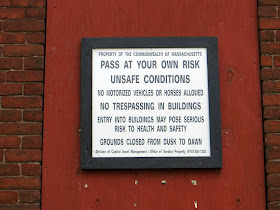 The place is located just off Hospital Road at the edge of Medfield. Not knowing where to park, I pulled right up to the gate. Just beyond it were trailers, a field, and—peeking between trees just beginning to throw out their autumn colors—a flash of red brick in the distance. A prominent sign beside the gate warned that the city wasn’t culpable for anything that happened beyond it, that you could check out anytime you’d like, but leaving was the devil.

As I got out, ready to scour every word on that sign, as well as the pair affixed to the gate, for the prohibition on entering that I assumed had to be there regardless of what I had read online, a security guard exited his car and walked over to me. 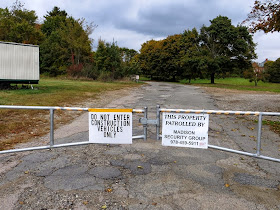 I knew this place was too good to be true.

“Is there a walking path around here?” I asked vaguely.

“Yes, yes,” he said, in a more friendly tone than I’m used to from security guards. “You can come in. You just have to park across the street and not in front of the gate.”

Holy cow. Too good and true. How often does that happen?

Although not its former 1,000 acres, the campus is big, with more than two dozen buildings still standing.

They are all constructed of matching red brick, but each had its own shape, its own unique characteristics, its own reason for being. An old, yellowing sign directed visitors from long ago to the East Hall, the Kitchen, Administration, Hillside House, the Progressive Work Center. 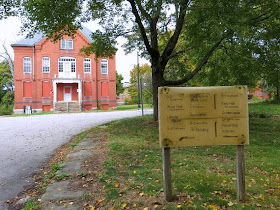 Every once in a while, the security guard would drive by in a slow patrol, waving as he passed and stopping when he thought his car would interfere with one of the six million pictures I was taking.

I was there on a Saturday, on a beautiful Fall day, and, not counting the securing guard, I ran into two couples. That’s it. Four people. Nobody else in one of the coolest spots in New England. I don’t know why that place wasn’t packed. If there are better places to hang out in Medfield than the grounds of an open abandoned hospital then I really need to move to that town. 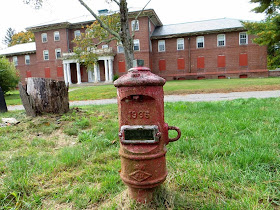 As to my impression of the place, I can’t say it was spooky. Not on my visit. Like I said, the weather was amazing, my exhilaration was high. I mean, I’m sure at night, when it’s closed to the public (the grounds are open from 6 to 6), the place spawns monsters. Or, on a particularly foggy day, I’m sure it would be a glorious nightmare.

That day, it felt like the back lot of a Hollywood studio, ready to go for any movie that needed an old institutional complex. And the place has been used in movies. Parts of Shutter Island were apparently filmed there. Also, The Box. 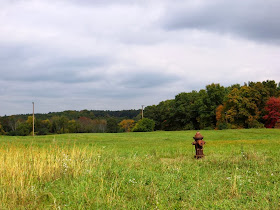 I’ve always thought that it was in the best interests of a property like this to open up to the public. It destroys the forbidden mystique that attracts the type of people who could care less about trespassing and/or vandalism, while encouraging healthy intrigue from the more law-abiding. I don’t remember seeing any graffiti while I was there. 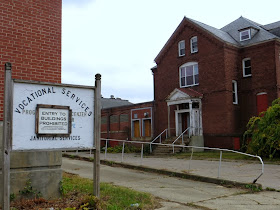 I didn’t want my visit to the hospital to end, but I did eventually leave. I had one more thing to find. After all, wherever there’s an abandoned sanitarium, there’s always a hidden cemetery.

The graveyard for Medfield State Hospital is less than a mile east on Hospital Road. I almost missed the sign for it because it was so overgrown, and the metal gate that blocked the dirt path barely afforded a place to park. 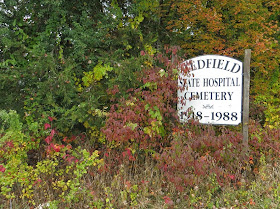 Just a short walk past a small utility building and down the path into the forest, the woods opened up into what looked like gated field.

In fact, were it not for those gates and the little square monument that marked it as Medfield State Hospital Cemetery, I would have thought it was merely that, a field. 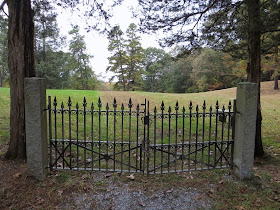 Even once inside it was difficult to see the flat stone tablets, each one denoting a lifespan that generally went from the mid-19th Century to the mid-20th. And that’s not because the place wasn’t well-kept. It was. Almost too well. The grass was lush enough that it covered the stones by its very thickness, and it was only in the shade of the pine trees where the grass thinned that the markers really stood out. 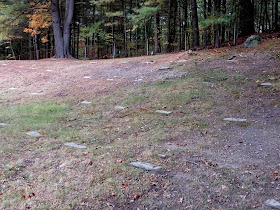 The monument at the front gates read simply, “Remember us, for we too have lived, loved and laughed,” and as much as I hate it when people omit the Oxford comma, it was a nice sentiment. And a good place to end my visit to a place I didn’t want to leave. 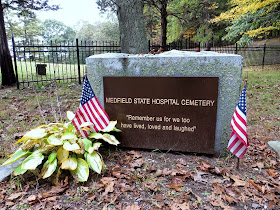 And then driving away from the cemetery, just half a mile down the road, I crossed this small bridge: 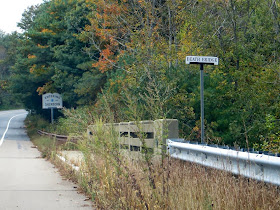 Despite its name, the bridge doesn’t have that cool of a story, but I guess in its own way, it’s an even better way to end the visit. 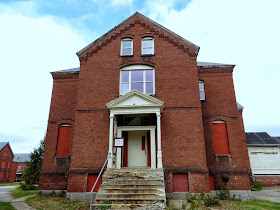 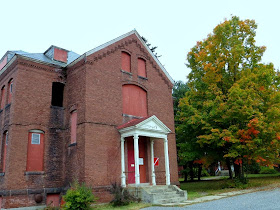 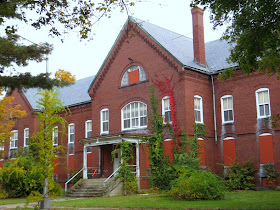 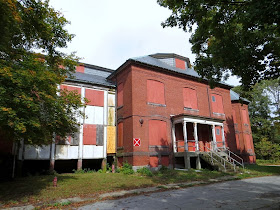 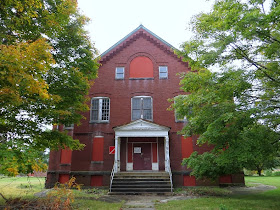 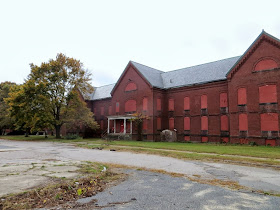 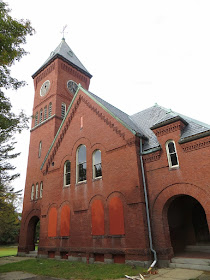 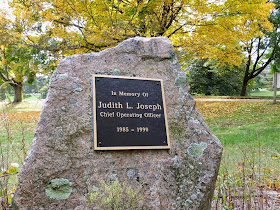 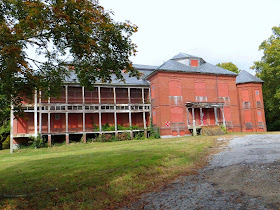 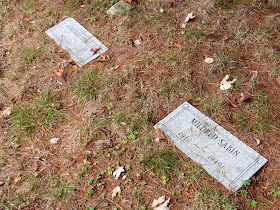 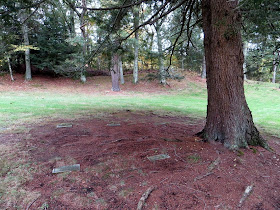